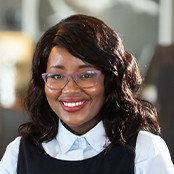 Slindokuhle Ngwenya graduated with an LL.B degree from the University of KwaZulu-Natal, Pietermaritzburg in 2016. During her time of study she was awarded the Dean’s commendation. She was also actively involved in the Students for Law and Social Justice (SLSJ) 2013-2016; The Black Lawyers Association Student Chapter (BLA) 2015-2016; LAWCO 2016, and was Student Research Assistant to Professor W Freedman in 2016. Slindokuhle then took a gap year in 2017 to become involved in community outreach where she volunteered at a Soup Kitchen in Pretoria. Slindokuhle commenced her articles in 2018 then joined Cox Yeats in 2019 where she completed her articles. She is a member of the Maritime Law Team.